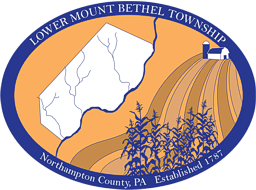 The first settlement of the area known today as Lower Mount Bethel Township took place in the early 1730’s when Alexander Hunter and several Scotch-Irish families began farming homesteads in a general area known as both Hunter’s Settlement and Martin’s Settlement. The source of the latter name was James Martin, another early settler, who later was a colonel during the Revolutionary War.

Prior to this settlement, the Scotch-Irish families had lived as far north as Forks Township and in 1728 had built a gristmill on the Delaware River north of Easton. The Mount Bethel hills at that time were barren because the Native Americans would burn the forests to drive out animals during their hunting expeditions. It was almost a century later before the area assumed a forested appearance.

In 1746, the inhabitants of the settlement petitioned for Township status with the result that Mount Bethel Township was established in 1748. It included the present-day Townships of Upper Mount Bethel, Lower Mount Bethel and Washington. Development at that time was concentrated in the areas near Martins Creek and Richmond.

One of the early landmarks of the region was Bethel Church built in the 1740’s, one mile north of Martins Creek. The church was the home of David Brainerd, one of the most outstanding Indian Missionaries in the colonies at that time. Brainerd began his missionary work in 1744 and died in 1747. Two historic markers are at the site of his home and mission.

During the mid-eighteenth century, a large number of Germans settled in the Mount Bethel region. In a short time, a conflict arose between the Scotch-Irish and Germans, resulting in the persecution of the Scotch-Irish minority. Shortly after the end of the Revolutionary War, a number of the Scotch-Irish families living in Mount Bethel Township moved to central and western Pennsylvania and to Tennessee. This event, coupled with more German immigration, created a dominant Germanic influence in the Township.

The Germans were primarily farmers and agriculture became the sole occupation. Suspicious of education, the Germans delayed the establishment of schools in the area.

For a brief time, around 1800, the Village of Richmond (now in Washington Township) was a regional center with a sawmill and gristmill as the primary industries. By the middle of the century, it had been surpassed by the emergence of Bangor and the slate industry. The area along Martins Creek began to develop as quarry workers built homes along its banks, using the creek for transportation. In 1871, Washington Township was separated from Lower Mount Bethel.

Between 1850 and 1890, the population of the Township grew very slowly and farming activities were dominant. However, near the end of the century the cement industry began to develop and had an effect on Township life.

The first cement production began in 1830, but it was much later that cement became an important industry. The great cement era began in the 1890’s as a result of the use of the rotary kiln processing techniques and a greater national demand for this building material. In 1890, 201,000 barrels were produced in the valley. By 1900, the figure reached 2,900,000 barrels and in 1910, it had increased to 22,000,000 barrels. Cement production was confined to a “Cement Belt” several miles wide extending from Belvidere, New Jersey to Ormrod in Lehigh County. Lower Mount Bethel was part of this “Cement Belt”.

Two companies emerged as leading cement producers in Lower Mount Bethel – Alpha Cement and Lehigh Portland Cement. Lehigh Portland Cement was formed in 1897 by General Harry Clay Trexler. In 1925, the company purchased the newly built Bath Cement Plan. Until it was closed in the early 1960’s, the plant averaged 200 employees.

Alpha Cement established two plants near Martins Creek, which were constructed between 1901 and 1908. Average annual production ranged between 250 and 325. Cement production ceased in late 1964. The plant is presently used for research purposes and as a distributing point for sand and gravel products

The decline in the importance of the cement industry has not been confined to Lower Mount Bethel Township, but has been apparent throughout the region. Regional employment dropped from 7,100 in 1950 to 4,900 in 1965. Neither the Alpha nor Lehigh plants in the Township have plans to resume production. Lehigh, in fact, has sold most of its property during the last few years.

Except for a very few industries, the disappearance of cement has meant a return to a rural economy for the Township. A large number of the residents are employed in non-agricultural jobs, but most of these work outside of the Township. Population, which increased from 1,335 in 1900 to 1,890 in 1910, leveled off and increased by only 100 during the next 40 years. No major concentrations of population emerged. Martins Creek, the largest town, has less than 1,100 inhabitants, contains three industries and about two dozen commercial establishments. Settlements such as Riverton, Gruvertown, Del Haven and Mount Pleasant are cross road developments.